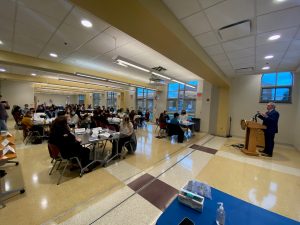 “This is one of my favorite events of the year,” said Senator Fowler. “The younger generation is the future and it’s important that they gain a better understanding about the legislative process and experience government first hand.”

“I’m proud to be a part of the list that have spoken today,” said Dylan Chambers. Chambers, age 19, is the president of the SIU Dawg Pound and the youngest serving alderman in the city of Metropolis’ history. “It is great to be around high school students and give that voice to them and show them what I have done no matter the age.”

After hearing from the motivational speakers, students were broken up into small groups to discuss policy issues and craft legislative proposals to present in front of their peers.

“Honestly, the whole process is what I learned. I had no idea how most of this stuff worked and I came in completely blind about it,” said Addison Bean, a senior at Gallatin County High School. “It is important for our youth to be involved in Illinois government because we are the future and we will be the voice of the state one day.”

After the legislative proposals were presented, students were able to ask questions and vote on their favorite policy issue presented by their peers.

“I learned that there are many different opinions on a lot controversial topics and sometimes it is okay to disagree with other people without it having to be such a bad thing to disagree and that you should feel a certain way, and that you can say what you want and express how you feel,” said Byron Lang, a senior at Anna-Jonesboro Community High School.

The winning student policy idea will be drafted into legislation for the students to discuss during the spring Student Advisory Council at the Illinois State Capitol in Springfield.